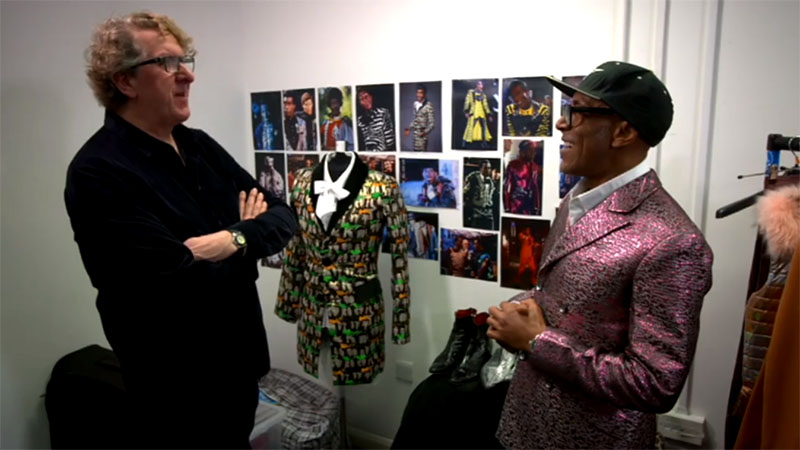 Is that really the title of the episode?

Yes. It’s a bit unwieldy but I’m sure you’ll agree, it also doesn’t work as a joke. Or actually relate in any way to what the episode’s about. But otherwise, totally worth it.

What was the episode about?

Well really it’s about the production design of the BBC era from Series III onwards as the show got a whole new look and feel after the creators Rob Grant and Doug Naylor became producers. They brought in Mel Bibby to redesign the sets and Howard Burden to design the costumes. The episode also highlights the work of the BBC visual effects department as headed up by the legendary Peter Wragg. There’s also discussion of the importance of the studio audience.

What are the highlights?

As with the previous episode, the sections which get away from just clips and talking heads are the most interesting. There’s more of the round table chat with the cast sitting on the Starbug set and a segment with Howard Burden showing Danny John-Jules some of the costumes from days gone by. It’s nice but it’s not quite as good as Howard Goodall’s talk through the music. The feature element with Howard and Danny actually detracts because it’s a forced conversation even if it adds a little texture to show. Howard just talking about the costumes in detail is actually far more interesting and it would have been great to see an in-depth discussion of their evolution but time is short and there’s a lot to cover. Really it feels like they’re barely scratching the surface.

This is a three-part documentary series and by the end of part two, the discussion hasn’t really gone beyond Series V. Even though there are clips from the Dave era and some excellent camcorder footage from behind the scenes of Series VII, the discussion points feel very much tied up in the earlier days, which have been covered in greater depth elsewhere. It just seems odd for a documentary series on Dave, home of Red Dwarf since 2009, to be focusing on the earlier years of the show when there’s more uncharted territory in talking about the more recent episodes.

We’ve not covered Rob leaving, Chris leaving, Chloe joining, preparing for the movie or coming back with new episodes on a new channel. Maybe we won’t. Maybe that’s not really what this is about

And we get to spend so little time with some of the talking heads, Hattie for example, that you wish there was more time. And that’s even more frustrating with the incredibly long opening title sequence which is just clips from the show you’ll see elsewhere. Why add filler when there’s plenty to cover? But even some of clip choices that have been made, don’t illustrate the points being made in the voice over.

What are you talking about?

Well, for example, when they’re talking about Mel Bibby and the new sets and how they changed the show, they use clips from the cargo bay. Wouldn’t have made more sense to show a clip of the Paul Montague’s Series I and II bunkroom and science room sets and contrast them with Bibby’s from Series III?

Additionally when talking about how costumes change the performance, it seems really weird that they talking about low Rimmer from ‘Demon’s and Angels’ rather than Ace. It works but it’s…odd.

But hey, I’m talking with a fan’s eye view, and this is a broad celebration of Red Dwarf aimed at general audiences. What’s in the show does the job and it isn’t wrong just because I would do it differently.

It’s definitely worth watching. While it doesn’t quite hang together thematically as the show races to cover so much ground, it’s a diverting enough viewing experience. And the subjects they’ve interviewed are really good, but if you’re a fan you want more than the old stories about malfunctioning skutters and the ‘Polymorph’ shrinking underwear scene getting a big laugh. I could easily listen to Mike Tucker and Alan “Rocky” Marshall talking about designing and crashing Starbugs all day but all we get is a snippet of their answers.

This isn’t a definitive history of Red Dwarf that some may have hoped to see. It’s all good stuff but it definitely leaves you wanting more.