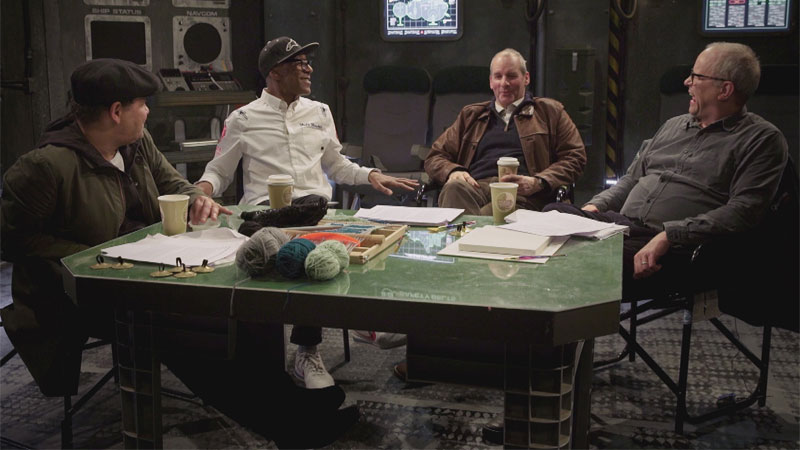 It’s a new Dave documentary series about Red Dwarf produced by North One and narrated by David Tennant. This first episode chronicled the early years of the show from its casting, delays, early reviews, and growing confidence moving into Series III.

The usual suspects of Craig Charles, Chris Barrie, Danny John-Jules, Robert Llewellyn and Norman Lovett all recorded new interviews during the filming of The Promised Land. Hattie Hayridge also makes an appearance along with bit players Tony Hawkes and David Ross. You also get chat from key members of the crew including co-creator Doug Naylor, director and producer Ed Bye, as well as commissioner Peter Ridsdale-Scott, production manager Mike Agnew and assistance floor manager Donna DiStefano who you’ll probably recognise if you’ve watched the DVD documentaries. There’s also celebrity fans who turn up and say that they like Red Dwarf.

Rob Grant and Paul Jackson aren’t there and that seems weird given they’ve been talking about Red Dwarf on the internet all lockdown.

Haven’t we seen all of this before on the DVDs?

A lot of it, sure. The behind the scenes footage is pretty much the same and completists will have seen all the deleted scenes before. The stories are familiar – we know Alan Rickman and Alfred Molina were up for the parts of Lister and Rimmer, and you’ve probably heard people say Red Dwarf is Porridge or Steptoe and Son set in space. But there’s some gold in there.

What’s the gold in there?

Composer Howard Goodall turns up for an extended segment where he breaks down the composition of the opening theme. He also talks all about the wall of sound production of the closing theme as well as treating us to a first draft of the lyrics. And while some of that might have turned up in the DVD doc ‘Settling the Score’, this actually feels more substantial. It’s also nice to break up the talking heads with the four stars sitting in Starbug’s midsection reminiscing about the old days.

On top of that, you get some really interesting TV archive footage with the clip from BBC’s reaction programme Open Air showing viewers praising Red Dwarf following the transmission of its pilot.

Anything that isn’t so good?

The logo is a bit rubbish, like someone knocked it up on MS Paint on their lunch break. The footage from the BBC run, which was shot in 4:3 has also been zoomed in to fit widescreen TVs and that doesn’t do the standard definition footage any favours. Closeups of Holly with the top of his head cut off look ridiculous. And the Series I footage in particular looks like it’s from an ancient era and appears to have been adjusted somewhat strangely in the edit. It’s just weird for a show that’s celebrating Red Dwarf not to present the footage in the best possible light.

But there are some really nice archive photos from the rehearsals at Acton that it’s always nice to see.

It’s an enjoyable watch. For hardcore fans, you’ve probably seen it before but it’s a bit like a new tour by your favourite band with all the old classics brought out, a few remixes, the odd forgotten gem and the very occasional new track. It’s not going to be something to convert new fans, but it’s a comforting watch with good company for those who know and like the show.

While this episode was about the early days, it will be interesting to see how the following 29 years are crammed into a couple of episodes.