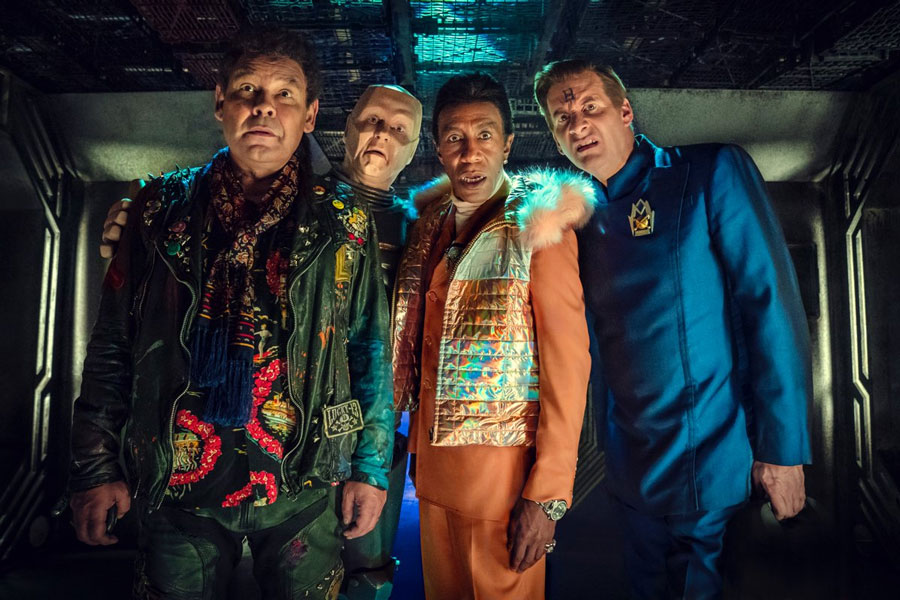 I’ve never seen one before, no one has. But it’s a 90-minute Red Dwarf special.

What about Back to Earth?

No, that was definitely three episodes (plus they didn’t add up to 90 minutes). And it also found Red Dwarf in a rather odd place after a decade off screens and was made without much budget and without an audience. The most recent Red Dwarf output in Series XI and XII has seen the show find new confidence with some really impressive episodes released that have built on the show’s mythology. On top of that, the show is back in a place where it has standing sets for Red Dwarf’s sleeping quarters, science room as well as Starbug’s cockpit and midsection so they can afford to build on all the established elements and do something a bit more expansive.

What’s The Promised Land all about then?

Remember the entire humanoid feline species descended from Lister’s pet cat Frankenstein who was pregnant when he was sealed in stasis? When we last heard of them back in Series I, they had fought a religious war and left Red Dwarf to find the promised land of Fuchal leaving only the sick and stupid behind. They are now led by Rodon, their feral king, who opposes the traditional religious beliefs and punishes those of follow the teachings of Dave Cloister with death. Three cat clerics meet his wrath but escape on a shuttle. Meanwhile on Red Dwarf, the crew have found Holly’s backup disc but unfortunately that doesn’t restore his memories so he kicks them off the ship. After months on Starbug, they encounter the cat clerics on board the Iron Star, a ship with far more advanced technology than Red Dwarf.

That sounds a bit mythology heavy. Does it work if you’re not a fan?

Curiously, with 32 years on the clock, this show acts a bit like a reintroduction to many of the classic elements of the show. It even opens with a really classy looking opening crawl explaining the origins of the cats. Later on, with Holly rebooted from his original disc, each of the characters explains their origins so it should all make sense. Also, the humour is pretty broad so if you’re not there for the sci-fi or references to the past, then you can probably enjoy some giant cat flaps.

But is it any good ?

This is top tier 21st century Red Dwarf in line with the quality of ‘Skipper’ and ‘M-Corp’ from Series XII. It doesn’t deal with the same kind of high concept science-fiction ideas of those episodes but it’s a very different kind of show. This is about exploring the mythology and the characters as they move into their later years. It seems somewhat insane that the cats haven’t really been used since the show’s early days and while they may not be explored in any great depth here, they act as effective antagonists as well as sounding boards for Lister and Rimmer to explore their own plights. It also shows that there’s plenty still to be explored in the universe and with these characters.

What’s going on with Lister?

Lister has started hoarding all the junk he finds in the cargo bays leaving Cat and Kryten wondering what’s happened to him. You might argue that Lister being in a depressive funk has been shown in the show before, whether in ‘Timeslides’ or even ‘Back to Earth’ but this seems different as he’s not really down, he’s just filling his time with unhealthy behaviour and obsessive activities. That actually follows pretty naturally on from how we saw him act in Series XII episode ‘M-Corp’. It takes finding three cat clerics who have followed his teachings all of their lives for him to get out of his rut give him a sense of purpose and to help him realise that his life has actually been full of good and selfless acts, starting with saving the life of his own pet cat, and that his actions have made a difference in the universe.

Just as the advanced technology of ‘Legion’ in Series VI gave Rimmer a hard light body, the Iron Star gives him an upgrade to diamond light – meaning that can manipulate any object to make it light, effectively turning him into a superhero. Unfortunately, this overpowers his light bee meaning he can no longer stay charged. And worse still, when Starbug loses its engines after a confrontation with the cats, the crew have to power down all systems leaving Rimmer running in black and white and with mono sound. And when Cat points out that this highlights that’s he’s only a computer simulation of a man, Rimmer has an existential crisis and considers letting his charge run out permanently.

What about Cat and Kryten?

While the drama may be about the cat people, the story doesn’t really focus much on Cat. However, as always Danny John-Jules can step up at the end of every scene and get a big laugh. Him making a lovely, shiny gilet out of Starbug’s emergency parachute is a particular highlight as is his conversion to worshipping Lister. And his constant barbs at Rimmer finally end up having consequences as he sends him into a spiral when he points out that his computer makes his decisions and not him. He also gets the emotional crescendo where he declares Red Dwarf to be his home and even grieves over Rimmer when he thinks he’s sacrificed himself.

Robert Llewellyn is doing his finest work as Kryten this century with his presence and line delivery spot on. The character has taken on something of an unhinged quality, and from his opening sequence creepily following Rimmer to the nodding sequence on Starbug, he gets a number of joyous moments. There are even references to Bobby’s electric car show hosting duties when Kryten finds Starbug’s manual and realises that it’s a hybrid.

How are the guest cast?

Ray Fearon manages to do silly things and still have an intimidating presence as the cat feral king Rodon while Lister’s followers played by Tom Bennett, Mandeep Dhillon and Lucy Pearman may have limited time to shine but they’re all good and get the laughs where required.

He works far better than he ever did during Series VIII and there are actually  plot reasons for him to be there. And once he gets his old personality back, he delivers some incredibly funny lines. And when Norman’s always on the verge of corpsing, it seems to make his delivery even funnier.

Any references to the past?

The whole second half of the show feels very like Series VI with the crew trapped on Starbug, which now has a lovely new expanded midsection. There’s even a classic Space Corps directive joke. We get to see (almost) all of Rimmer’s uniforms as his light bee upgrades to diamond light. We see the cat’s holy book featuring pictures of a godlike Lister which was last seen in Series I’s ‘Waiting for God’ and the whole idea of the Cat people hasn’t really been explored since the early years of the show. We see Kryten putting his eye onto a finger which is something that he did in Series V episode ‘Terrorform.’ Rimmer displays in black and white which was something originally scripted but proved too prohibitive for a 1988 sitcom’s effects budget (although you did see examples of it in the Smegazine’s comic strips).

There are also elements of the novels with the hologrammatic existential crisis explored in the opening sequence of ‘Infinity Welcomes Careful Drivers’ as well as Rimmer’s heroic moment which has a similar feel to the crescendo of ‘Last Human’.

The centrepiece of the whole show is Lister and Rimmer’s exchange in Starbug’s cockpit where Lister convinces him to keep living because he’s ‘moonlight’ – he’s something real even if can’t exist alone. It’s genuinely touching and a moment of pathos that the show has earned and one that the longer running time allows the drama to delve into. Chris Barrie is at his absolute best when he’s playing Rimmer as miserable. In recent years, he’s had more of an air of a self-satisfied retired military general, and that’s fine. But here, playing it smaller and sadder, he’s genuinely brilliant.

I’m not sure that’s a word. There’s an opening exchange between Lister, Cat and Kryten about giving Cat a sex-change operation so Lister can have children that feels a little out of place. It’s a topic that you shouldn’t really get into unless you have something to say and while it didn’t verge towards problematic, the episode would be better if it wasn’t there.

Also, given this is a TV movie, the montage opening titles feel a little out of place. It appears, based on what’s currently streaming on UKTV Play, that the episode will be split in two for future showings so that’s why they need one. Given that before and after the opening credits, they linger on a model of Red Dwarf, it possibly would have made sense to have a classic Series I-style opening with the credits over the model shots, but this is really nitpicking.

You should probably say something about the production values now.

Yes, I was just getting to that. The set of the Iron Star is absolutely incredible and vast and something you could quite easily see in a movie. With a new director of photography, the lighting on the main sets is a bit brighter than in the last two series which gives Starbug more of a classic look and helps contrast the sets of Red Dwarf and Starbug with those on the cat ships and the Iron Star. Even smaller sets like the cat escape pod look pretty incredible.

For the first time, Red Dwarf has a full score and with orchestral and choral sections composed by Paul Farrer. It’s beautiful and really elevates the whole show to the next level.

It appears that there are no new model shots in this special with a couple from the archive of Red Dwarf in space and Starbug leaving the landing bay. Otherwise it’s all beautiful CG provided by Axis Studios. While Red Dwarf’s model work has always been an important part of the show’s identity, the recent output, while good, has never captured the brilliance of the show’s heyday. There’s been nothing as great as the scouter sequence in ‘Quarantine’ for example and there haven’t even been the resources to recapture the Series I credits flyover. And although the bigature is impressive, the current main Red Dwarf model is old and was created for a movie that never happened and then chopped up for use in Series X. To replace it would be a huge cost.

The effects here looks great. Starbug looks perfect and it makes me wonder if you could get away with a fully CG Red Dwarf as well to give a greater detail and diversity of shots. 1997 was the wrong time for show to use CG effects; in 2020 it feels like the right way to go.

So what’s your conclusion, fanboy?

Overall, this is an absolute triumph. It can be a challenge when a sitcom decides to up its length but it feels organic here and you never really question the runtime. Big silly visual gags sit alongside quiet moments of reflection, along with the best production values the show has ever had. The cast are on top form and overall, it’s a joy to watch. If the show is to continue into the future, this feels like the right format. But if it’s the end, then it’s a good note to bow out on.