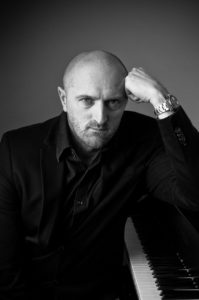 Red Dwarf: The Promised Land took the series’ production values to a new level in terms of the look, effects and, perhaps most significantly, the music. With the length of a movie to play with, Red Dwarf needed a cinematic score to accompany the action. Award-winning media composer Paul Farrer took some time out of his busy schedule to tell us all about his latest composition.

Just in case anyone doesn’t know, could you tell a bit about your career as a media composer and the incredible variety of shows you have worked on?

I’ve been in the music biz since I was 16 and this is my 30th year in the industry. Along the way I’ve composed the music for shows like The Weakest Link, The Chase, Dancing on Ice, Gladiators, Ninja Warrior, Judge Rinder and a few others.

Did you know much about Red Dwarf before this? And how did you get involved in The Promised Land?

I’m the Composer and Musical Director for Michael McIntyre’s Big Show on BBC One. On McIntyre I’d worked quite closely with the Line Producer (TV industry legend Adrian Pegg) and when he moved onto The Promised Land he suggested me to Doug. I remember seeing Red Dwarf when it started in the late 80s. I was always very aware of it and loved the bits I saw along the way but I wasn’t really a fan in the true sense – which is nothing to do with the show – I just watch so little TV – I never seem to have the time!

After more than 30 years on air, Red Dwarf has something on an established audio identity. Is that something you have to take into account or do you view it as something completely new?

Of course I was aware of Howard Goodall’s iconic trumpet theme and theme song. He’s a real hero of mine and his vast legacy of film, TV and classical music is amazing. For The Promised Land though I just wanted to do a score that felt right to me. And as I wasn’t familiar with any previous musical styles or thematic references from the Red Dwarf world I just did my own thing without acknowledging what came before. So I went down the route of traditional grand orchestral sci-fi – which felt sort of right at the time. I got the impression that the production all seemed to like the fact that I was coming to this as the new boy. I think the fresh perspective fitted the re-invention of the format to a 90 minute special but at the same time it’s also a big undertaking. I think I delivered about 53 minutes of music scored to picture.

Where does the process begin for a TV composer? Is it when you see the scripts or do you have to wait for something close to the final cut to create perfectly timed pieces of music?

Doug sent me the script and on page one was a pink post-it note with his crappy drawing of the opening cat-fleet visual joke. I was in love from that point onwards. The first thing I had to do was the little ‘Listy-Listy’ song the Clerics sing on-screen. Then as shooting progressed Alan Levy the editor would send me sections and scenes as they were edited, then a rough assembly of the whole film which went through many many revisions and tweaks so I could try ideas out to until they had a locked cut which I used to score the final music to.

We were all hugely surprised to see you recording with a full orchestra, something completely new to Red Dwarf. How unusual is that for a TV comedy? And tell us more about the musicians you worked with. The choral work is stunning.

Really honoured to have been invited into the #reddwarf universe to compose the music to the feature length special launching next month. I’m going to share a few pics of the fun we had creating the score to this brilliant film.@RedDwarfHQ pic.twitter.com/1dsLQWyBsi

I’m very used to working on tight budgets and I’m quite good at squeezing as much as I can out of every penny so while we couldn’t use real players throughout I was able to bring in live orchestral elements in the places where I felt we’d really need it. For example the scene near the end where Lister confesses his mortality and Cat does his ‘I am home’ speech.

This was (for me) the highlight of the film and with such terrific performances on screen from the actors showing real emotional honesty I knew I had to match that in the music. The orchestra played beautifully. As a former choir boy adding choral sounds to anything is always a treat. When Starbug is crash-landing on the moon – the bat eared listener might have noticed that the choir are all singing ‘Smeg Head’ and ‘Skutter’ and at the point in the film where both Kryten and Rimmer have power failure issues and death for everyone is imminent the choir are singing ‘Resurrectus Crucifixus’. A nod to the religious themes of the film and a reference to the sacrifice that Rimmer is about to make in the next scene. We don’t hear nearly enough choral plot spoilers sung in Latin on telly these days. You don’t get that sort of thing on EastEnders – which is a great shame I feel.

How long did the whole process take from your first note on paper to the final mix?

I started some initial sketches in November 2019 then did bits here and there as things were filmed and edited but the bulk of the composing and recording was probably from January to the start of March.

Red Dwarf, being a science fiction comedy is already straddling genres. The Promised Land veers between being a Biblical epic and superhero film while still feeling like an audience sitcom. Is it a challenge to bring all these different aspects to life while still making if feel like a cohesive whole?

The hardest thing is the number of gear changes in the script. The genius of Doug’s writing (like all good comedy) is to be able to suggest terror in hilarious situations and conversely to see the comedic irony or farce in dark moments. The Promised Land is all about that and (musically speaking) the nature of the comedy/banter set against a dramatic driving plot is a tightrope to walk. With music for comedy you have to get out of the way of the jokes so actually the music becomes less about pointing up when things are funny and more about providing an emotional subtext for putting the viewer in that moment. Selling the idea of size or threat or excitement or whatever. For example the wonderful ‘moonlight’ scene between Lister and Rimmer when two characters are laid bare and one is convincing the other to literally not end his own life was the hardest scene to score. Doug and Alan kept telling me – ‘Do less!’ And they were, as always, right. Sometimes a delicate single note or tone is all you need to sustain an important scene. Compared to that, creating music for planets exploding was a piece of cake.

Are there any composers or scores you draw inspiration from for something like this?

Obviously when we think about big scale orchestral sci-fi we can’t avoid John Williams music for Star Wars or Hans Zimmer’s grand scores. I’m a huge admirer of both of these geniuses and if I could get close to even one percent of their talents I’d be happy, but I’m sure I’m nowhere near that.

The Promised Land has been embraced by fans with many mentioning how much they love the score. How does that feel?

It’s always lovely to be a small part of something that is well received but the positive reaction from Red Dwarf fans to the film itself and those that have commented on the music has been the biggest compliment.

Strictly speaking if I’m doing my job well no-one should really notice the music at all – it should just make you feel things and take you on the journey. But of course I was very aware of the awesome weight of expectation that comes with such an established, beloved and iconic show. I just didn’t want to muck up something that means a lot to so many people.

You’ve released some of the tracks on your YouTube channel. Are there any plans for an official release? Or even a live performance.

We’ll see. No immediate plans for full a soundtrack release or live show. But as always – expect the unexpected. I might get drunk one night and just put the whole soundtrack on YouTube. See if anyone notices.

We’re all hoping Red Dwarf will be back for more specials soon. Would you like to work on the show again?

Absolutely. If Doug Naylor rings me – my answer will always be ‘yes’.

Thank you very much Paul for taking the time to talk to us.