The new artwork for Red Dwarf: The Promised Land – coming soon to Dave – was released earlier this week, which added some much needed brightness to what’s been an… interesting week.

We loved it so much, we wanted to find out more about how it was made so we caught up with Veer Assi of UKTV Creative (UKTV’s in-house creative agency) to find out what went into making this astonishing design. 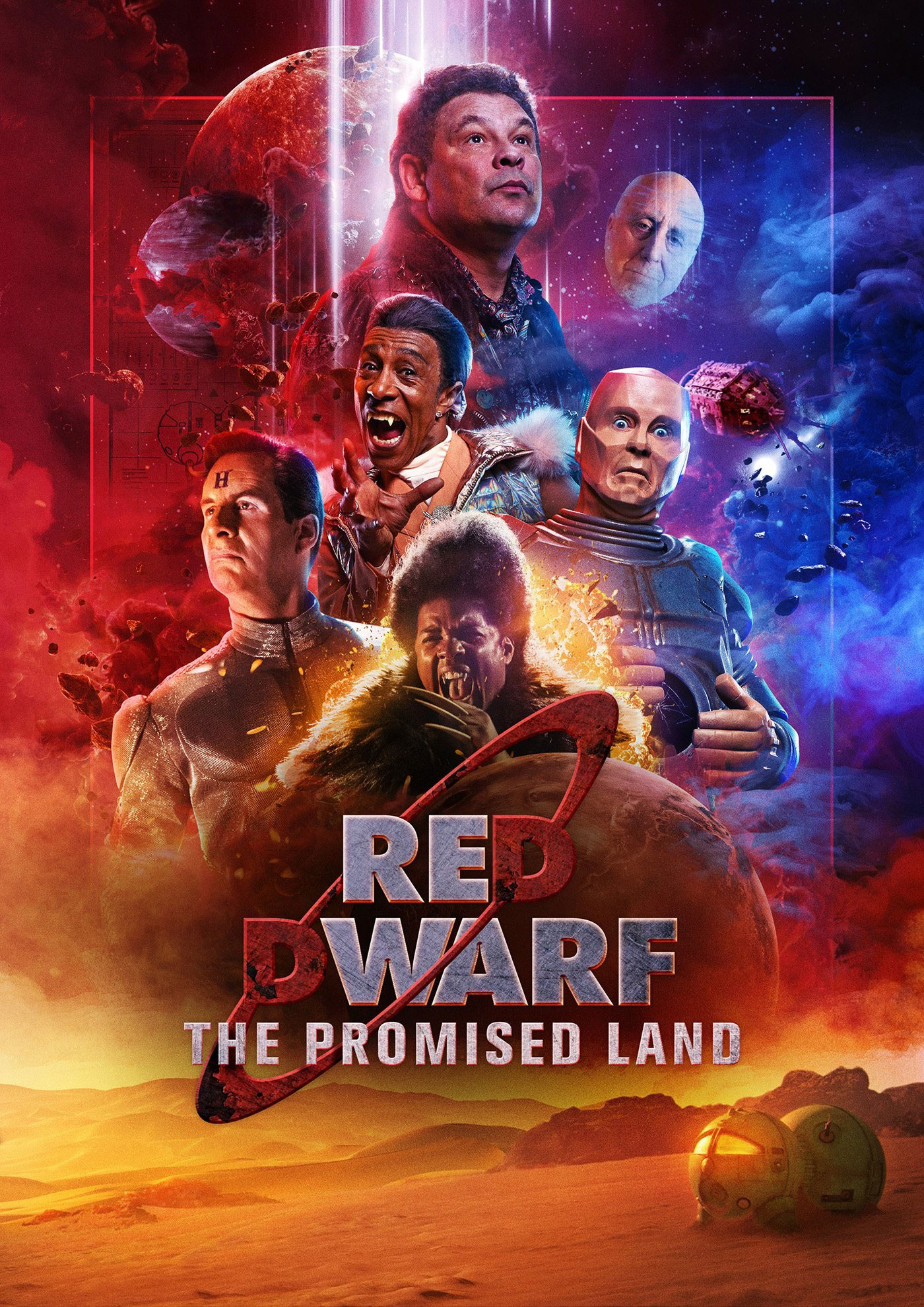 The new Red Dwarf special is the first true feature-length episode, was there a mandate to create more cinematic imagery?

This is a brand new format for the show – it’s exciting and it feels epic, and we felt it was imperative we delivered something that would match up – something that production, the cast and the channel would be proud of. We also believed and hoped that newcomers to the show would be just as struck by the artwork as long-time fans.

Was there any particular inspiration for the style used?

I’m a massive fan of Drew Struzan’s works, in particular the Star Wars Special Edition Triptych, his legendary Blade Runner key art and the timeless Back to the Future series. Add to that a few influences from Marvel and Star Trek (geek alert I am indeed a fanboy!) and we had a great structure for the poster.

How do you begin creating something like this? Is the creative concept the vision of an individual or is it a collaboration from the outset?

With any brief it’s always a collaborative effort. Doug and Richard were really helpful in suggesting different elements and themes of the story that we could include in the poster. One can have a great idea but it’s how a group of creatives and artists align and add to the idea that really creates something special – which I feel we’ve definitely delivered on this one!

Does Red Dwarf art require a different approach compared to other UKTV shows?

Definitely. It has such a history and is such a big show for us at UKTV that you need to do something memorable every time. Of course, each project comes with its own challenges but ultimately it’s about doing thorough research and knowing your audience. Then it’s on to the fun part of development, selecting the strongest idea and executing the final concept!

Tell us about the shots of the cast. Were they created specifically for this poster?

It was a combination of episodic stuff that was shot during filming, effects stills provided by production, and then a separate shoot with “the posse” over at Pinewood Studios, shot by photographer Des Willie. A really fun day during the last week of filming. The cast were amazing – they’re professional but they all know how to keep spirits and energy high in between takes, which made the photo shoot really easy and also very enjoyable! Plus we had great photographers in Des, Gareth Gatrell, and Jon Hall, and that makes all the difference!

There’s a new grittier version of the logo used. How did that come about?

Ahh, well being a typical designer you’re always trying to update or even redesign logos. It quickly occurred that changing the typeface and layout of the design would have been the wrong thing to do, seeing as the logo is so recognisable.

So whilst investigating industrial textures and materials I decided to implement a variation, along with a few other tricks, to really give it that dystopian but epic feel which Doug and Richard immediately fell for!

It’s been released online. Where can we expect to see it next? 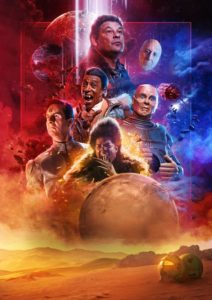 Hopefully it should be popping up everywhere – in advertising, in the press, even on your Sky or Amazon Prime menu. We know some people have been asking how they can get their own copy, to which I say watch this space…!

How many elements are used? Every time you look, it seems like there’s something more to see?

Love that! My favourite posters have always been those with intricate and subtle elements that are discovered over time.

I’m not going to tell you how many, you’ll just have to keep looking!

How many people worked on this from start to finish, and what skills are involved?

We had a team made of several departments from creative, marketing and PR here at UKTV, plus our photographers Des, Gareth and Jon, and then the design itself was led by myself and our fab retoucher Tom Webster. And of course Doug and Richard were involved every step of the way.

How long did it take to create from briefing to sign off?

With a project like this, there can be a lot of people involved and it can sometimes take a while to get the concept approved… Well not with this one, it was the unanimous winner. All in all about 3 months from research to completion, that’s quick trust me!

This artwork has been pretty universally praised among an often hard-to-please fandom. How does that feel?

Myself and the team are over the moon with the comments we’ve received to be honest. The fans have been waiting a few years for some new Red Dwarf. The new special is really brilliant and it’s the job of this artwork to match up to that and get everyone excited. I think it’s mission accomplished!

Thank you Veer for talking to us! And thanks to the team at UKTV who made this possible.

Red Dwarf: The Promised Land arrives on Dave later this year. Find out more about the special here.