We’ve been fairly quiet on the oft confirmed then delayed Blu-Ray collection of Series I-VIII. But with a (new) release date of 2019 set, we finally have our first tangible look at some details on the contents, as well as a first look at the cover over on The Official Site. So let’s start with the content. While we still await a definitive list of everything that will be on the discs, we do finally have confirmation that extras from The Bodysnatcher Collection will indeed be included. While new extras would unsurprisingly not seem to feature in this set, it would have been an outrage to not include the ones from the now out of print DVD set given that they include the extensive documentaries for Series I and II that every series after them was granted on their initial DVD release.

It does seem that we won’t be seeing any of the remastered episodes on the discs (which again is no real surprise), which does also mean we will lose a few extras from the DVDs in the form of the commentaries on those episodes and the text tracks, but it’s nice to see the Re-Dwarf documentary still makes this set, even if it has become a bit orphaned.

But’s move on to the main event in this story; the packaging. The overall look of the set is likely to divide opinion given that compared to previous released its remarkably straightforward with something of a retro feel to it that is vaguely reminiscent of the Series IV T-shirt released in the 90s. It won’t be to everyone’s taste, but broadly we’re relatively in favour of the general look of it. We approved of the return to the sans-serif font with the recent Dave series, and there’s no denying it looks good on this set, even with the weird clipping of the W and the A in the logo.

The more critical among you may well point to the fact that there’s very little on the front of the main box or its spine to give a feel of what the show is beyond a few planets, and the spine is perhaps a bit plain. In fact it seems odd these days for a Red Dwarf product like this to feature only the logo and not a ship or the cast, but it makes it feel in keeping with other such BBC Blu-Rays released recently such as The Hitchhikers Guide to The Galaxy.

That’s not to see the package is absent of these elements however, and we can see that as with Just The Shows the collection has been split into two volumes (one for I-IV and one for V-VII), each delineated with a different ship.

We’re slightly less keen on the Bodysnatcher disk being presented separately in the set in a cardboard sleeve however. Repeatedly removing a disk from such a sleeve leaves it more prone to scratching than it sitting in a normal case, and it just generally seems odd to have a loose disc floating around. We can understand that it’s been separated to make it stand apart from the main event of the eight series, but it still feels a bit odd.

Bodysnatcher aside though, it’s worth mentioning at this point that this is likely a much more preferable way of presenting the discs to having all 19 in one case as anyone that owns the ungainly and brittle cased Futurama collection on DVD can attest.

Unfortunately, this also brings us onto our big nitpick. The Starbug and Red Dwarf featured on the cover of each volume are of course heavily stylised and simplified to be in keeping with the rest of the look of the set, and personal preference will likely dictate how you feel about this. It’s perhaps not our first choice on this site, but it’s one that also doesn’t bother us greatly and we can get onboard with the overall look, even if the Dwarf suffers more than the bug for losing so much detail.

However, while some of this is intentional, there also seems to be something of a substantial error that has led to the Dwarf’s look going awry. To understand this, let’s first look at the picture it is clearly copied from: 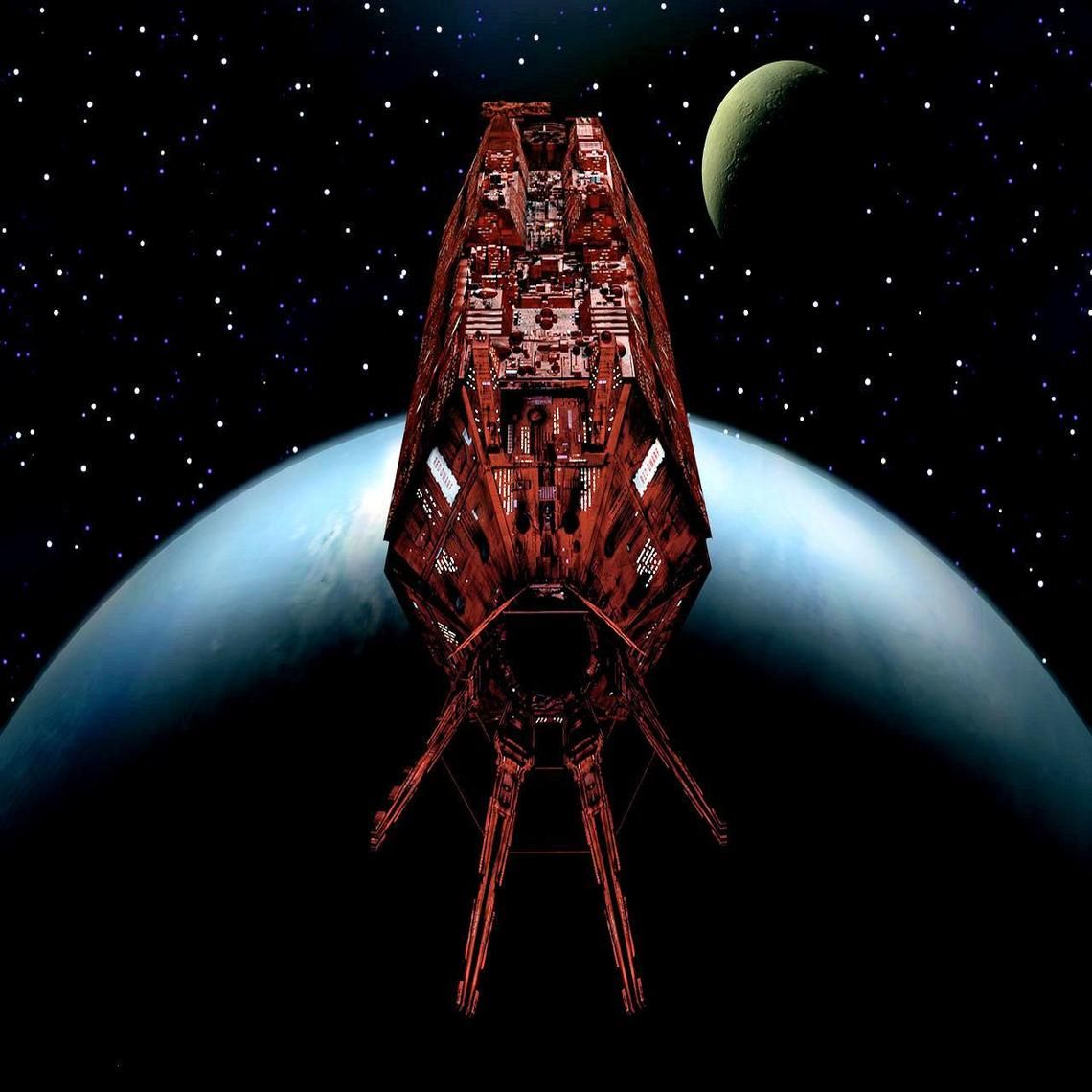 First of all, let’s get the big one out of the way; yes this is the Remastered version of the ship. It’s an odd choice, especially considering it seems the remastered versions of the episodes won’t be included, meaning that the only series this version relates to is VIII which is in the other volume with Starbug on the front. However, it’s also perhaps not that surprising given that over the years the Remastered version has continued to crop up long after it stopped being relevant. Again, it’s not our preference, but we can overlook it given the design is heavily stylised.

What’s harder to explain away is the fact that the whole front of the ship is wrong. It’s a problem that would appear to stem from the above picture. If you didn’t have a great familiarity with the show, you could perhaps be forgiven for seeing the ship differently, but to gain a perspective on the problem, this is what Red Dwarf looks like according to this new cover: Somehow we’ve ended up losing two struts from the ram scoop and the cable joining the top half of them, and that before we mention that the ramscoop appears to emanate from under the ship rather than on the nose. Ultimately, it ends up looking kind of like Red Dwarf, but simultaneously like a knockoff trying to get around copyright. Considering this is supposed to be the definitive package of Series I-VIII, it really does strike us as important that the image of the ship it is named after actually LOOKS like the ship.

Best case scenario is that what we are seeing here is either incomplete or has the layers on the image put together in the wrong order. However we sort of expect that it’s not a case of the ramscoop being hidden by a layer that should/ will be below it, as the cable for the top half would be visible if it was there and it’s just simply absent here. If this isn’t a mistake, we’re kind of shocked it’s gotten this far without being flagged, and here’s hoping that with the release date now being January there is still time to get it fixed before it appears on shelves.

Overall, the set does look like a nice package, even if it ultimately is an upgraded version of material we have had before and we’re looking forward to the release. But please GNP, fix that Dwarf image and the whole thing will immediately become a whole lot more desirable.